A bonus combo pack of picks for Thanksgiving.
Note: I use the LVH Lines from vegasinsider.com. The Super Contest lines are not live, but instead are set and held the entire week.

Detroit (+3.5) over Houston – One of the drawbacks of a handicapping contest is that if you want to select a Thursday game, all of your picks for the weekend must be submitted early. That obviously allows an additional 48 hours for a key player from a team you selected to go all “Stanley Wilson” or “Barret Robbins” and end up AWOL a couple nights before a game. Therefore, I generally stay away from the Thursday games unless there is a spot that is too good to pass.

That is the case with the Lions this week. I know, I know coaching is an issue, but isn’t Jim Schwartz Gary Kubiak, before Kubiak became the Kubiak we know laud over? Think about the Texans back before Wade Phillips, loads of talent, a fantasy cornucopia, but unable to finish most game, which left them the poster children for mediocrity. Sounds just like the 2012 Lions.

So, why do I feel so strongly the Lions are the play in this game? Well, for starters the line is 3.5, so unless the Lions are down a point and fail on 4th down deep in their own territory with precisely enough time for the Texans to run three plays, fail to make a first down and kick a covering field goal, we should be ok with the hook. In other words, the 3.5 makes this a value play.

In addition, the Texans fall into gambling rule #872 – never trust a team with a huge division lead, on the road, as a favorite, coming off an emotional overtime win against a team from the opposing conference, on a short week.

San Diego (+1.0) over Baltimore – Speaking of gambling rules, here is another (#409) – never trust a team traveling cross country in between games against a heated division rival when the line looks too good to be true. Oh, and the heated division rival happens to be the Steelers. The Ravens are just 5-10 ATS after Steelers games since 2004.

And if you think I am crazy to back Norv Turner and Jim Schwartz, thats nothing compared to what’s coming up. . .

Carolina (+2.5) over Philadelphia – That’s right fans, let’s throw Ron Rivera into this three team, “I was a great coordinator, but suck ass as a head coach” bad coaching parlay.

The gambling rule for this game is as follows (#95) – never back a soft team, that has clearly quit on their head coach, when said head coach has been spotted checking out real estate on the opposite coast, in any situation, period! The corollary to this rule is as follows, “if the game in question comes after a Thanksgiving feast where the head coach consumes enough food to feed a third world country, then triple the bet.” Poor money management scheme there, but I don’t write the rules, I just follow them.

Tampa Bay (+1.0) over Atlanta – Despite this being a division game, when the Falcons look in the rearview mirror they don’t see the Buccaneers old rusted “Buffalo Bill” beater of a van, they see a brand spanking new black and gold Maserati driven by Drew Bress and the hard charging, Joe Vitt led Saints. Therefore, this game falls into the “huge division lead” rule, as well as the “look ahead” rule (pretty standard top ten rule, #9, that states be wary of the team with a big game looming).

Also, one of my theories that I never have had the resources to prove but seems true is that NFL coaches will gladly accept a loss in a “lose the battle, but win the war” way. Given all the factors mentioned above, I can see Falcons coach Mike Smith and his staff mailing this game in an attempt to bring a good old fashioned swift ass kicking down on his team that they can then use as a re-focusing point of instruction. Sounds logical, right?

NY Giants (-3.0) over Green Bay – Green Bay has revenge on their minds as they travel to New York to face the defending champion Giants! You want to know what happened to the last team that had revenge on their minds when they played the defending Super Bowl champs? Well, it was Last season, when the Falcons took on these same Packers, the Pack romped. And that was in Atlanta.
Gambling rule #645 – “Revenge is over-rated!”

RG III is amazing but let’s not get crazy here – he is still a rookie having to go on the road (albeit in the equivalent of a library), on a short week with the rookie wall rapidly approaching.

NY Jets (-7.0) over New England – This game is the equivalent of a younger brother, who almost never is able to beat his older brother in the annual Thanksgiving day game of one-on-one, getting a crack at the elder after recent knee surgery and a battle with the flu (why didn’t he get the mercury laced, population control flu shot that was made mandatory by his employer, you ask? Well, grasshopper, that is an entirely different column). If he can’t get him this time, when will he?

And here is a Thanksgiving day bonus, my first couple “Seven Out” losers:

Texas (-7.5) over TCU – Given the picks above it just didn’t seem right not to include Mack Brown, who is the college football equivalent of a “great coordinator, horrible head coach”, as he should absolutely be in the NCAA hall of fame, in the recruiter section, but would not sniff the HOF as a head coach, if the criteria went beyond “I won most of my games because my talent was so far superior, I couldn’t lose.” So, yeah, why not, let’s throw him and the perpetually under-achieving Longhorns into the Turkey day selections.

Iowa (+14.0) over Nebraska – Remember last week I wrote that I am snake-bit when picking the Huskers? So, I went with the total instead. I lost by a single point!

Why do it again? Well, the most important factor is motivation. For the Huskers it’s the “bigger fish to fry” syndrome. Yeah, they have to win, but one look at the Hawkeyes and the Huskers are like, “next!”

For the Hawkeyes, however, this is a self-created rivalry, their “big game”, their “season saver”, their “bowl game” and this is for the “Heroes Trophy.” Little hayseeds in Iowa grow up dreaming about hoisting the “Heroes Trophy” triumphantly above their heads after a stunning victory over the far superior rivals to the west.

Side note – effing “Heroes Trophy!” Really? Now if I was tasked with creating a cheesy B1G trophy for this annual pillow fight, I would have done much better than this meaningless “Heroes Trophy.” This is a conference that has games with trophies such as “Pual Bunyan’s Axe” and “Floyd of Rosedale.” Despite being hokey, those trophies are freaking sweet. It’s almost like Iowa decided on the whole “Heroes Trophy” thing because they were like, “we’ll never have it anyway, so let’s stick them with this hunk of junk.” 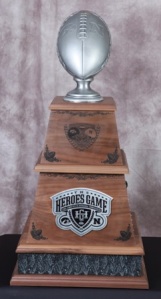 I mean shouldn’t the Iowa/Nebraska trophy have something to do with beef? What about a gigantic wooden butchers knife, simply called “The Butchers Knife.” Think about it, Husker players could then, legally, do the throat slitting gesture. Or what about a giant golden cow, wait that’s already been, unsuccessfully, done. You could also go with the “Our Beef is Bigger than yours” trophy.

It would have even been more creative to simply lift the Iowa/Iowa State trophy name, “CyHawk” and go with “CornHole” or “CornHawk” or “CornEye.” If they choose that cheap way out, my favorite would be “Husker Hawk”, with the trophy being a mythological half Hawk, half Human dressed in overalls and sporting the gayest grin in history.

I half expect when Nebraska wins, but fails to cover, they accidentally leave the trophy in Iowa City. And when Iowa calls to inform them, Nebraska responds with, “ahh, you know what we will pick it up next time we come to Iowa City, in two years.”