Part two of the 2012 fantasy teams, this part is the positive side of fantasy football, better known as the players who showed up this season or the “Anti-Eli Manning,” which also works. 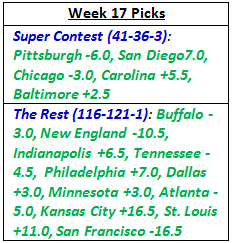 In the simplest form, there are two personality types of people in the world – Type A and Type B. Type A personality traits include being overly competitive, goal oriented and achievement-driven. Given those traits, it’s obvious that a Type-A personality would measure success in fantasy football by winning rather than enjoyment. On the flip side, Type-B personalities, “do not mind losing and simply enjoy the playing game.” It’s clear which personality type is better suited playing a random game of luck.

To illustrate this, let’s say a Type-A and Type-B engage in a game of flip the coin. Probability tells us that it is likely that each person in this classic duel we will half of the flips. But let’s say the Type-A person goes on an incredible streak of calling the coin correctly ten consecutive times. Type-B guy is like, “Wow, that is impressive . Well done.” Type-A guy isn’t focused on what has happened, they are focused on continuing the streak. Now we all know, that whether Type-A guy has called the coin correctly 100 times in a row, the next call is 50/50. And if thrown enough, Type-A guy will regress to the mean, with streaks of brilliance mixed in. Each “streak of brilliance” is a killer for Type-A because he knows what can be. Whereas, Type-B, is smiling and enjoying watching the coin do a multiple flips in air.

Moreover, Type-B personalities love fantasy football for what it really is, entertainment. It keeps them interested in the game, after their teams are eliminated from the playoffs. I can imagine a Type-Ber giggling, like child watching Sponge Bob turn himself into various household items, when they sign into the league website on Tuesday morning to find out they won. I also think the Type-B guys put very little into the game like, “oh, shucks I missed free agents again this week” or “oh, my guy is on IR, maybe I should pick up his backup.” It’s the social aspect, not results, that keeps them coming back. They love getting together at the draft, maybe running a bit of smack talk during the season, and maybe, if everything breaks right for them they have a shot at a championship, but if not, “oh well, great season, see you all in August!”

I maintain both Type-A and Type-B people are the same when they start playing fantasy football, but any taste of success will drive the Type-A to reach higher levels of success. Soon, winning a division isn’t an accomplishment unless they win a playoff game, and so on. Remember the coin flip example from above. Once they’ve won ten in row, they want the 11th and if they lose the 11th, the other 10 don’t matter.

And that’s the rub, it’s in a Type-A’s DNA to be hyper-competitive and want to win, but once fantasy football has become essentially a coin flip and the losses mount, the Type-A goes crazy and eventually burns out. That’s when you find them holed up in their house buried under hundreds of fantasy football magazines.

But fantasy football has not always been a “coin flip.” In fact, back in the day (defining day – a time before fantasy football was engorged with zillions of fantasy experts, who actually make a living giving make believe advice for a make believe world), a Type-Aer had a huge advantage over “happy-go-lucky, winning doesn’t matter, just likes being part of something” fantasy player, he could out-work him for players in both the draft and the during the season. Those days are long gone, when every fantasy player has access to a version of the “weekly waiver wire recommendations.” There are no longer players that can be defined as sleepers, because once Matthew Berry announces them as a sleeper, guess what, they are no longer a sleeper. And these “fantasy sites” begin their fantasy football year so early and have so much time to fill, that they literally mention every player who might have a shot a scoring a tenth of a fantasy point in the coming year.

Now it’s a coin flip, essentially a lottery ticket where everyone shows up to the draft with a freshly printed draft cheat sheet that tells them who to draft, when to draft them and when to crack a joke about a guy being drafted to soon. These seasons could literally be played out with auto-draft on, for everyone, and then it’s a matter of avoiding injuries and getting the right mix of guys. A lottery draw!

That randomness is what will ultimately drive all Type-A players out of the game, because they know they have less control. I agree that there is randomness is virtually every facet of our lives and that shouldn’t be any different in fantasy football, but I ask you would you be happy if promotions given out by pulling a name out of a bingo machine? Exactly.

Therefore, the question becomes – can fantasy football be fixed? Can we mitigate the randomness and bring the Type-A back into the fold? Sure, I think it’s possible to fix this mess, while allowing some randomness for the Type-B’s. How? Glad you asked, here are some ideas:

Don’t be surprised if I come back after a year off with a radical new league that mirrors the above ideas.

Ok, enough about me, let’s get back to the exciting conclusion of the 2012 fantasy teams.

To start off the “Anti-Eli Manning” side let’s introduce the “All-Rookie” team. This season seemed like there was an unprecedented number of rookies who played a major part in not only their teams success, but also their owners fantasy success. 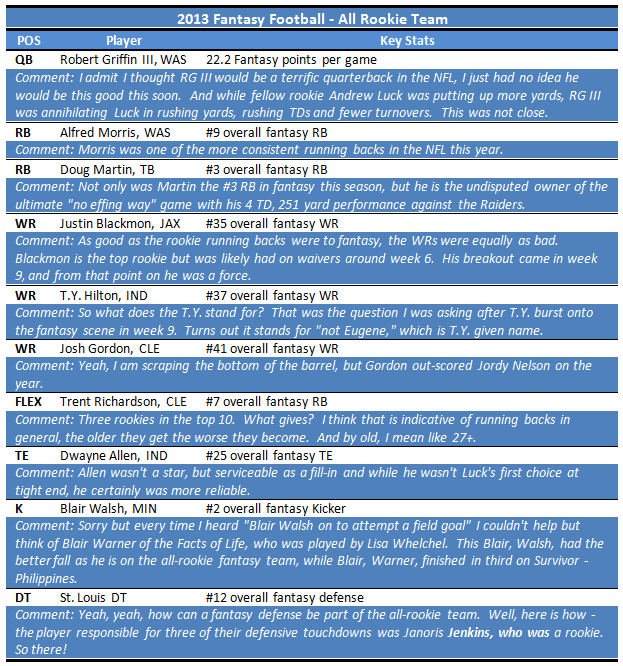 There is an old fantasy football adage that states, “You can’t win the league with your draft, but you can lose it.” You see, most fantasy football championship are won with a fair amount of free agents comprising the winning lineups. Therefore it makes sense to recognize the top free agents pick-ups of 2012, with the “All-Waiver” team. 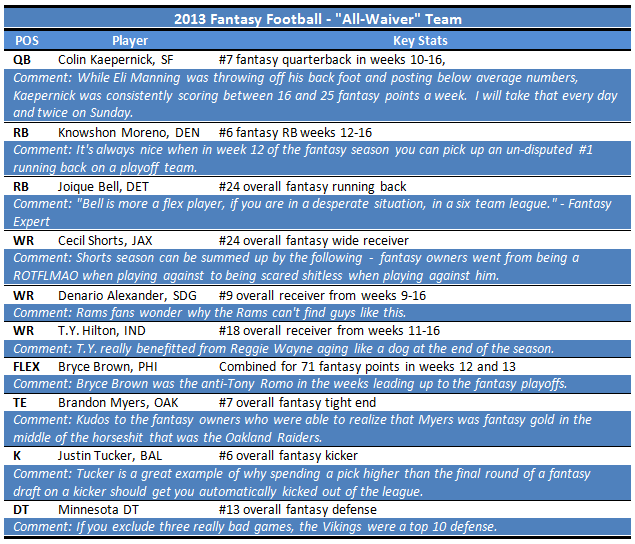 And without further ado, here are the “All-Fantasy” teams. These are the creme de la creme of fantasy players for 2012. Beginning with the 2nd team, players who were crazy good, but not quite the top. 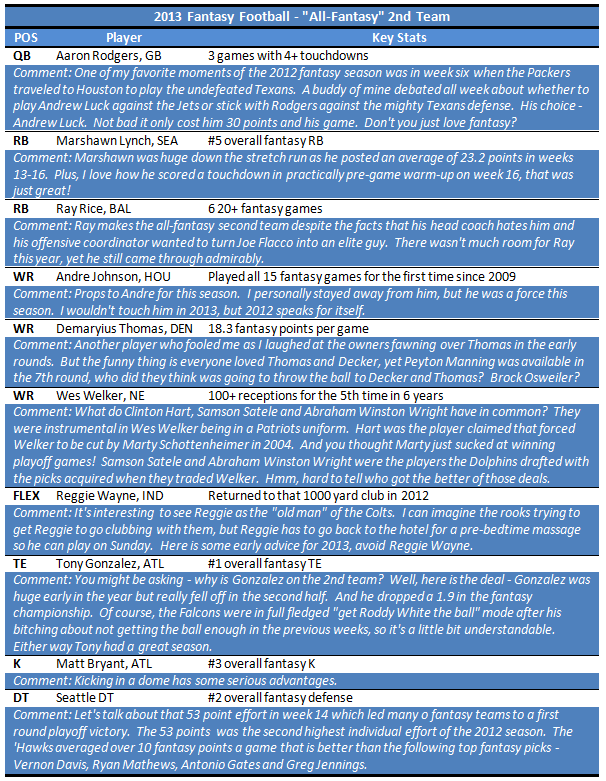 And the fantasy superstars – the “All-Fantasy” 1st team: