Football is back! And much like the lockout last year, we again have the NFL to thank for giving us excuses as to why we cannot pick winners and why our teams are so crappy. This year it’s the scab officials. Therefore, expect to hear plenty of complaining that “these scab refs just cost my team the game” and “if not for these retards, my team would have won the Super Bowl.” But hey, it’s all good, right? I mean if the fans of 30 teams believe that with the regular refs their team would have had a great season then who should be complaining.

And yes, the two teams that that don’t believe their team would have had a great season are the Super Bowl champion and the Lamb, because the Lambs are hopeless with or without the regular officials.

Goodness, can’t Magic Johnson put a group of billionaires together to purchase the Rams? Then after the purchase spend the next two months trading for viable talent while acquiring undesirable contracts of players past their primes, you know the fading former superstars. Oh, one more thing Magic – move the team back to L.A.!

Anyway back to the officials, I never thought I would miss the long, drawn out explanations of why the call stands by Mr. Guns, Eddie Hoculghi until I had to endure the replacement refs so abjectly confused that they tried to use the “my microphone isn’t working” excuse as they try to gather their thoughts. Apparently, they also have trouble counting past three, because the scabs had a tough time marking off simple off-side penalties. And how easy it will it be for the coaches and players to manipulate these morons? It’s safe to say that ever team might want to invest in at least one Harvard Law student, just so they can win the manipulation game.

The big question is how long will the NFL allow this to go on? Of course, I get it, the NFL has diplomatic immunity. Imagine, for a minute, if Goodell and company decided the current players are making far to much money, but rather then go to former college players as replacements, they decided to fill rosters with players from third world countries. Would the ratings be affected at all? Maybe slightly, but I can see the ratings staying virtually the same. And what really matters, fantasy and gambling, won’;t miss a beat. In fact the “sharps” would think they had angle because they have actually seen Mohammad Al-Jazzer play cricket. Hey, he looks pretty athletic! Yup, we the American public can deal with just about anything, but we simply cannot and will not stand for not having the NFL. Sadly, the NFL knows this, which allows them to conduct business without fear of repercussion.

Are you telling me a billion dollar enterprise cannot afford to fork over what amounts to spare change found between couch cushions to ensure that the games are not a parody of themselves? I guess that is exactly what the NFL is telling us! But I will still be watching and watching and watching. . . 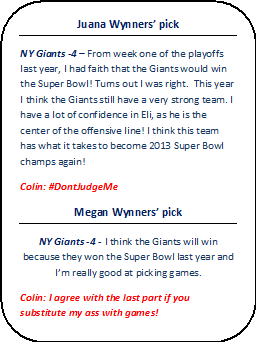 Well, without out of the way, let’s get to the opener, moved to a Wednesday due to the Democratic National Convention. See even the beloved president doesn’t want to compete with the NFL.

Teenage Girl Logic: Tony Romo is way hotter than Eli Manning! And despite the reality that Romo is married (ugh, what a ho!) and has a kid (Hawkins? What kind of name is Hawkins? That probably came from his ho wife), I still think I have a chance at him when he trades that biatch in for someone younger and hotter. Go, Tony, go!

Trending: The defending Super Bowl champ is 9-1-1 ATS in the last 11 NFL kickoff games. In the Thursday night openers, the champ is 6-1-1, with only the 2009 Pittsburgh Steelers failing to cover against the Tennessee Titans. OF course, this game is played on a Wednesday where the defending SB champ is 0-0-0.

X’s and O’s: The Giants D-Line should have a field day against a brutally bad Dallas offensive line. That will cover up the flaws in the Giants back seven. However, without Jason Witten the Cowboys are more apt to leave the TE in to block, so in a sense not having Romo’s butt buddy might actually benefit them.

The Dallas defense will be better this season. DeMarcus Ware should have a big night harassing Eli and the rest of the defense should be able to do enough to keep the ‘Boys in the game.

Colin Wynner picks the Winner: Four feels a little too much for me, given the following – a. the Giants propensity to struggle at home; b. it’s a division game, too much on the line to mail it in; c. the Dallas defense should be much improved in the second year under Rob Ryan, in addition they added two high end corners to their defensive backfield; and d. with the offensive line problems in Dallas, points will be at a premium. In those cases where I feel the game is significantly under the posted total, I feel better with the points.